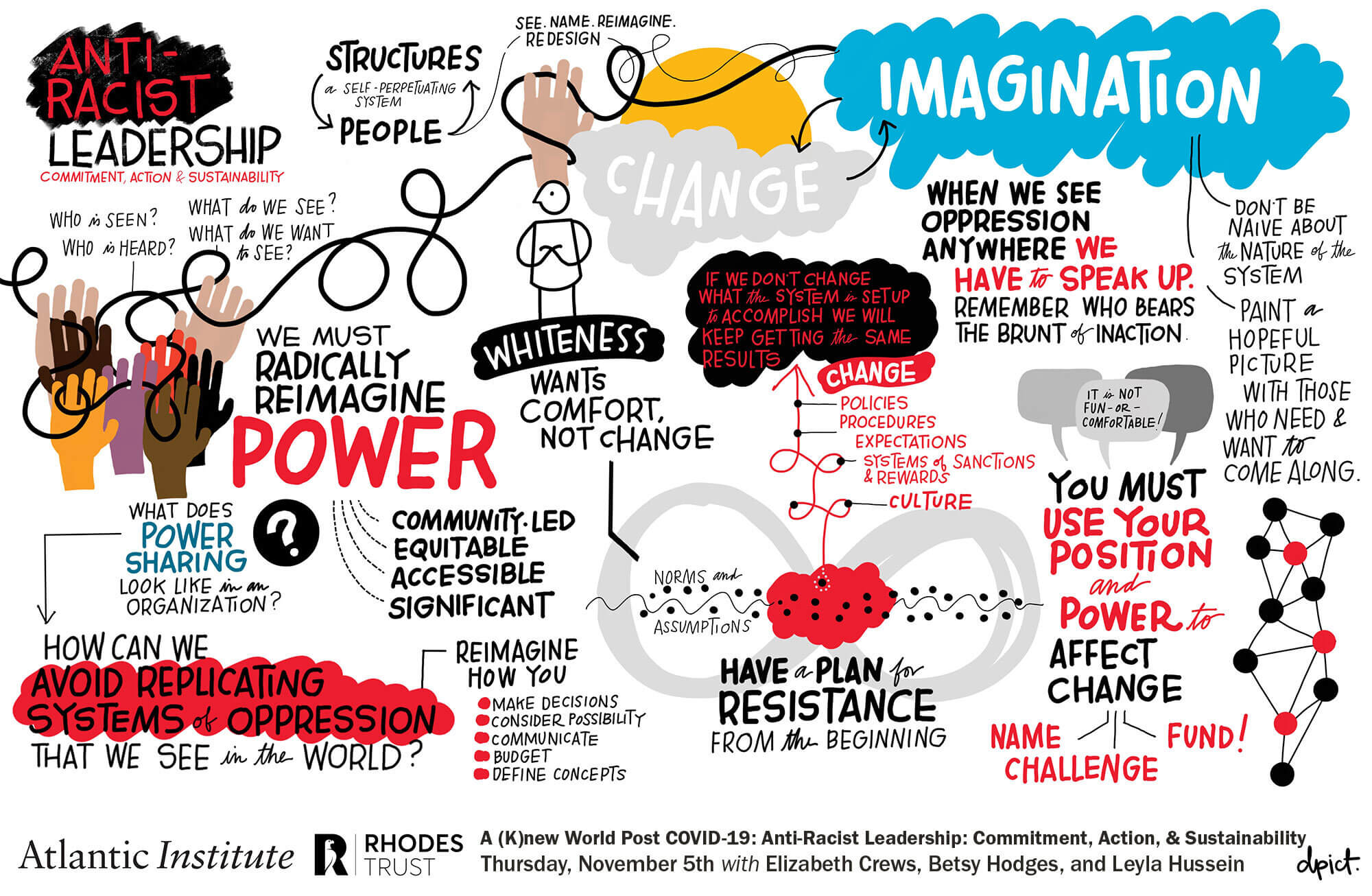 What should leaders be doing to tackle systemic and institutional racism in the long term? As part of the Atlantic Institute’s webinar series, COVID-19: A (K)new World Reimagined, this topic was discussed by three leaders who advocate transformative action: campaigning for greater public participation in how officials spend public money; raising awareness among white people of the in-built racialization of many of the systems in the United States; and advocating for the protection of Black girls and women who have been subjected to, or are at risk of, female genital mutilation.

Elizabeth Crews is Director of Democracy Beyond Elections, a collective effort involving campaign groups such the non-profit organization Public Participatory Budgeting. Put simply, they want to empower people to decide together how to spend public money. Since 2009, Public Participatory Budgeting has supported dozens of governments, public institutions, and organizations, equipping community members often ignored, pushed out, or marginalized by current democratic systems with the tools, resources, and opportunities to deeply engage in democratic processes relating to public budgets.

‘Unlike traditional elections which are filled with barriers to participation, community-led, decision-making centers directly impact on community members and require that those left out of traditional elections in our democracy, including Black communities, immigrants, formerly and currently incarcerated folks and youth, are centered in both the leadership of participatory practices and their outcomes.’

Betsy Hodges, 47th Mayor of Minneapolis in the United States and Atlantic Fellow for Racial Equity, also spoke at the webinar, having served as a consultant to organizations working with cities to improve outcomes for people of color. As a white person, she raises awareness among other white people of the 'systemic racism' that produces racial disadvantage.

‘When it came to governing, there were a number of things I learned internally and externally.  Whiteness wants comfort. It doesn’t want change. You see in government and in a lot of organizations work that doesn’t push the boundaries of what keeps white people comfortable about our whiteness and about race. So, we do pilot projects, but we won’t overhaul the budget and overhaul our budget priorities,’ she said.

‘Often our institutions and the organisations that we work with are set up to get better outcomes for white people than for people of color. If we don’t change what the system is set up to accomplish, we will keep getting the same results.’

She argues that leaders have to change systems and policies root and branch, giving an example of her work with an organization that wanted more diversity.

‘We recruited five people of color to come onto the ten-person board. We did so explicitly: that you are here because we’re concerned about having voices of color at the table; we’re not just going to be silent about it, which is often what we white people do.’

She warned of ‘resistance, particularly from white people’, not overt opposition but excuses about a lack of budget or obstructive delaying tactics.

‘What I recommend is having a strategy for resistance from the beginning as somebody will be telling you that they will have the document on your desk on Monday and they will tell you that every Thursday for the next six months,’ she said.

Leyla Hussein, OBE, is a psychotherapist and founder of The Dahlia Project, which supports women and girls who are survivors of female genital mutilation (FGM). She is a survivor of FGM, a process by which the genitalia is partially or totally removed, which she described as ‘one of the worst forms of violence’.

‘Racism has been the block in tackling female genital mutilation,’ said Leyla Hussein.

‘Let’s just say that if a blonde, white girl from the West was dragged to the floor and had her genitals cut, it would be violence and child abuse. Do not let people use culture and religion as a show to hide behind. We must call out violence and challenge it to end.’

She called for the collection and sharing of information, warning that the COVID-19 pandemic had put vulnerable girls and women even more at risk of becoming invisible or being ignored.

‘Every 11 seconds a girl is being cut globally. Somehow, we don’t see it. It’s no wonder that women, survivors of the action, are themselves perpetrators of their own daughters. I myself am a survivor of this. I know the deep emotional scars. Part of our healing as survivors is to understand what really happened to us. We must be clear about what is happening. This is happening to children. Again, I’m going to repeat – Black girls.

‘Because of the fear of offending people, especially white people are scared to challenge communities. We are letting these girls down. We can use our positions and our power to tackle these issues during the pandemic. Severe economic hardship and uncertainties about the future have created a toxic environment for desperate families.

‘It is vital that there is direct funding and support for grassroot activities. We can’t keep saying we care about people of color without investing. The reason FGM is not considered a big issue is because it is talked about within the context of religion and tradition.

‘I want to challenge you all: How will you use your power to stand up for little Black girls?’

Participants in this series of webinars include the staff, scholars and Fellows of the hosting and partner organizations: the Atlantic community, Rhodes Scholars, Obama Fellows and Roddenberry Fellows. The hosting and partner organizations have a common mission - to work with and for scholars, activists and practitioners in their efforts to bring about a better world for all.

The webinar, Post COVID-19: Anti-racist leadership - commitment, action and sustainability, took place on Nov. 5 2020. A recording will soon be available.

The artwork by dpict, produced during the event, visualizes some of the themes discussed.

“I want to challenge you all: How will you use your power to stand up for little Black girls? 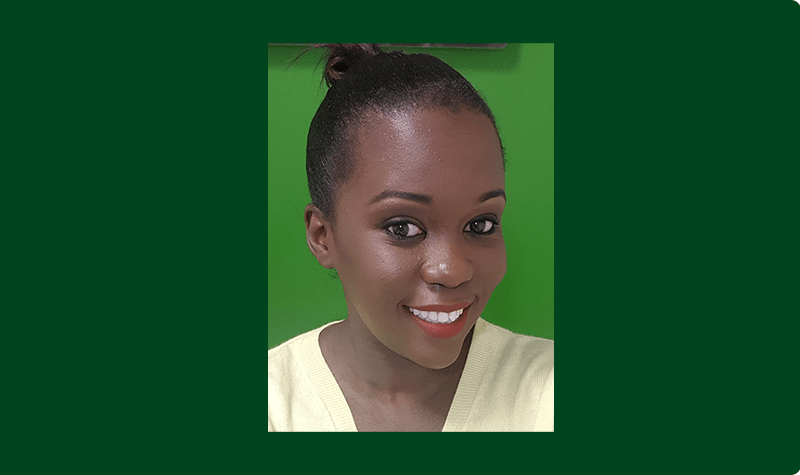 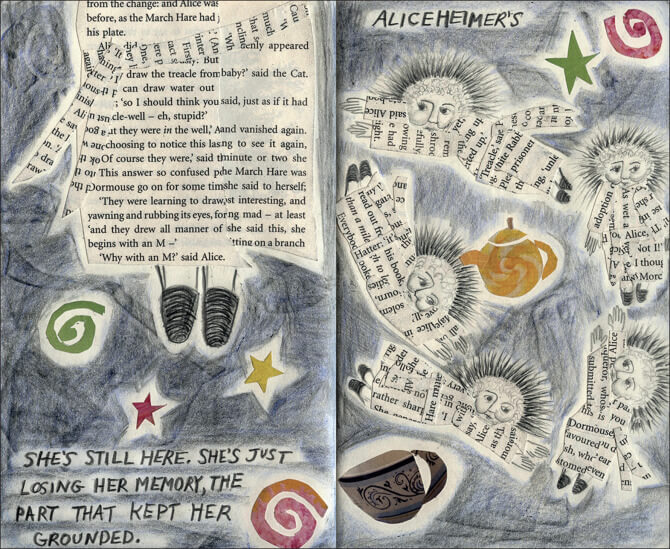 A moving essay on dementia in the lancet